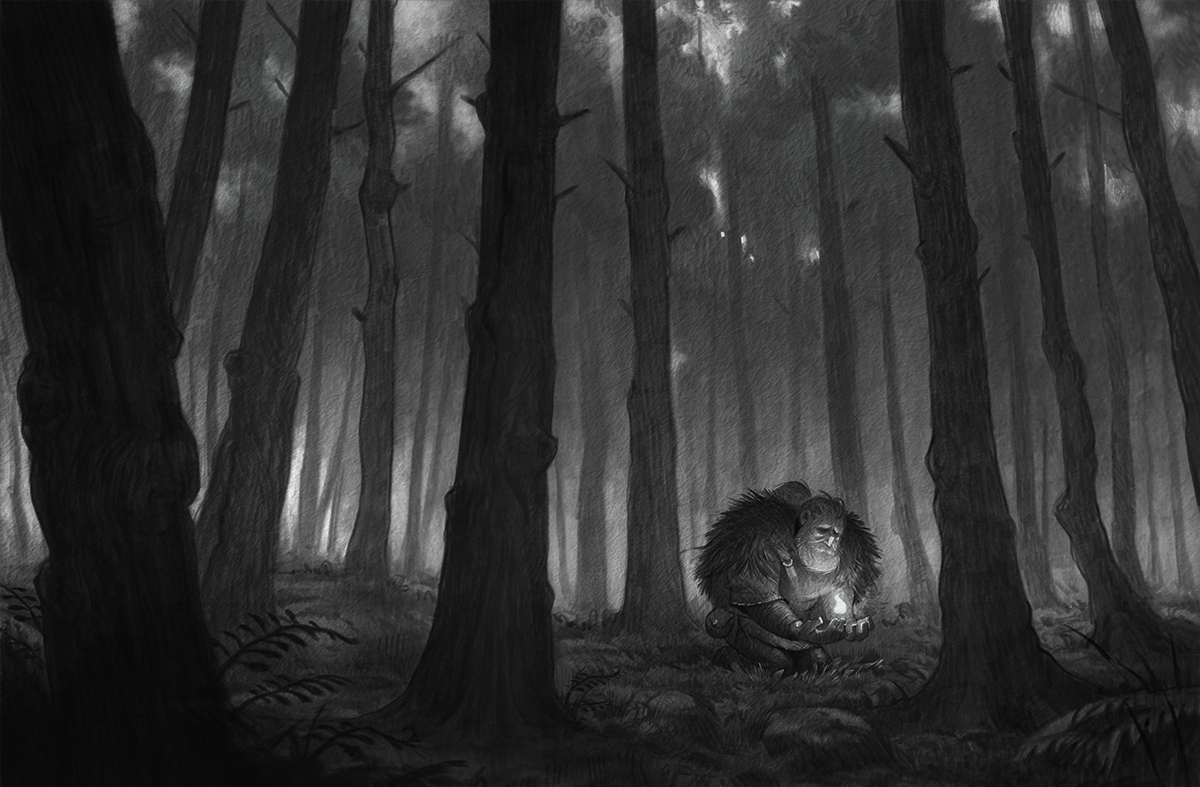 „There are times in life, when it feels like walking through a deep, dark forest. The ground overgrown and hard to traverse, while the horizon is lost in a thick fog. No matter for how long you walk, there seems to be no end in sight. You get tired, worn and sore .And while you walk, loneliness starts to grip your heart amid the dark. Indeed, maybe you are alone. But deep within you dances a little flame. keeping you warm, keeping you company. That flame might dim and shrink while you struggle against the dark. But even as embers, it will keep it at bay. And nothing from the outside can extinguish it. If you take heart and keep on moving forward, the embers will reignite and let the flame dance again. And one day, one day it will set your soul ablaze and lead you out of the forest“

For my first, real blog post I thought, why not talk about the image that currently leads my landing page?

The Illustration is called „The flame within“. It’s a very personal piece about a dream I had during a strong relapse into depression a short while back. I will talk more about both, depression and dreams in the future, as they inspire a lot of my work. The dream went pretty much like the writing attached to the image. I was walking through a dark, almost pitch black place. The only thing with me was a little, glowing ember in the palms on my head. That ember began to flicker and I fell to my knees. The little light continued to fade and at the moment when the surrounding dark almost swallowed me, the flame rekindled and bathed everything in a bright light.

I think my subconscious wanted to remind me of something that happened during my youth. A little something that would give me a much needed boost to fight back the depression once more. In order to talk about that and what the prominent symbols of that dream, the flame and darkness, mean, I have to go back in time a bit.

I had a rather rough time during my youth. Loneliness, bullying, family issues. I won’t go into too much detail here. I know those are things that on one hand are not as terrible as others. But over time, they chip away at you, bit by bit. One night, after a really bad day I snapped. The events from that day, and the many days before ran wild in my mind, throwing me deep into a downward spiral. At night, I ran out into the forests surrounding my home town. Going into the forest at night was not unusual for me. I actually enjoy night hikes. But that day, I just ran, then walked for a long time, spiraling down deeper into a worse, and worse mental state. At some point, I just fell to my knees and wept. I just wanted to lay down on the ground never to get up again. Lost in the forest. It felt like something from the outside was crushing me.

That’s when an image appeared in my head

For but an instant the impression of an ember, glimmering in the darkness appeared before my minds eye. I held on to that impression and it began to change. Very small at first, the ember grew bigger, and bigger. With its growth, the feeling of my body changed. I got warmer and felt like something was pushing against the crushing weight from the outside. As the flame began to dance the feeling of sadness turned to rage and my inner voice started to shout: „NO!“ „I will not lay down and be lost!“ Get up, get up again, fight!“. As if something slumbering within me was trying to rid me of the despair I was trapped in. With that, the terrible state of mind I was in was burned away. I held that image in my mind for a while. and returned home.

The dream I had brought back the memory of that day and the same thing played out when I woke up. I shot out of my bed and began sketching what would later become the image presented here.

I am of the opinion that dreams have meaning. Not all maybe, but some. As stated before. I think my subconscious tried to remind me of that situation years ago. To me, that ember that gets dimmer, then rekindles and burns away the dark, represents inner strength. The endurance of our mind or soul. Just like the flame, our inner strength can grow weaker if we have to endure stress, bullying and hardships for a while, yet it never goes out completely. When we feel weakest and lost, it will always be there enabling us to keep going.

To end this first post, would like to ask something of you. Next time you feel lost, depressed and think you might break, close your eyes. Take a few deep breaths and picture a glowing ember before you. Reach out to it if you need to, and let the ember grow. Let it become the flame that warms you, just as mine did for me.

I hope you like the image and the story. This first post should give you a good outlook on how future posts to single images will look like. The next one will be the making off to a finished project. I hope to see you then!

With that, I wish you a great day. 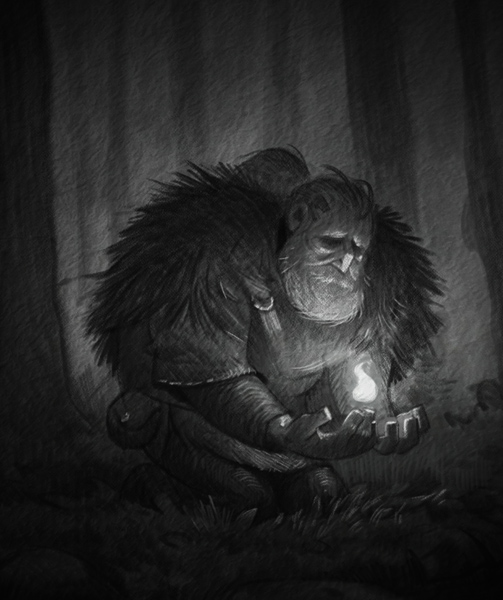 How to catch an Octobear „Ulriks grandfather used to tell him a story about an encounter with a vicious beast, down at the lake. When he was about Ulriks age, this mysterious beast attacked him Weiterlesen…